It has just come to my attention that my November 21, 2021, post "The Emperor's orb" coincided with the rise of "pondering my orb" memes, though I was not aware of these memes until a month or so later. In draft, the post had been called "The Emperor's globus cruciger," but I later changed it because the Rider-Waite Emperor's orb doesn't have a cross on it. 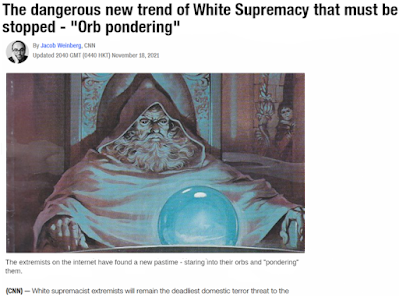 I just wanted to add a few orb-related thoughts.
In Le Tarot des imagiers du moyen-âge, Oswald Wirth says that the constellation that corresponds most closely to the Emperor is Hercules, and he includes a drawing of Hercules holding a club in one hand and in the other a branch bearing the golden apples of the Hesperides. 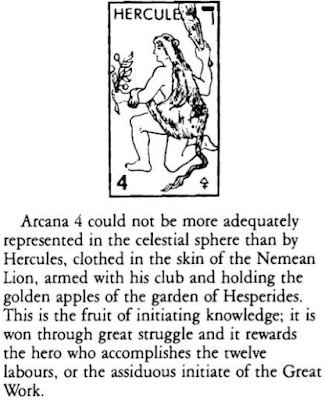 In the text, Wirth explicitly connects the Emperor's scepter with the club of Hercules but does not make the corresponding connection between the orb and the golden apples. He calls the apples "the fruit of initiating knowledge" but sees the orb as a symbol of "universal domination."

The globe of the world which the Emperor holds in his left hand is a sign of universal domination. This globe, moreover, is the symbol, not of the physical universe, but of the Soul of the World, the entity thanks to which all the miracles of Nature and Art are performed. In his right hand the Emperor clasps a mssive sceptre which is not without analogy to the club of Hercules. However, we must not see in this a brutal weapon, but the emblem of the highest initiation, or magical, power.

Although Wirth portrays Herucles holding a branch bearing apples, it was also common in ancient iconography (as in the Hercules of the Forum Boarium, below) to represent him holding the apples themselves in the palm of his left hand, just as the Emperor holds his orb. 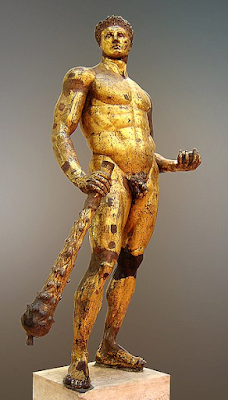 Hercules holds three apples, and the Emperor holds a single orb, but this is no very great objection to connecting the two, especially if we follow Vico in interpreting "three" in myths as being primarily an intensifier (as in "Thrice-Great Hermes" or "once, twice, three times a lady"). Vico argued that Neptune's trident and Cerberus's three maws were meant to convey the idea of a great spear and an enormous gullet, respectively, and he would doubtless have taken a similar approach to the three golden apples taken from the three Hesperides. (Vico would also of course have interpreted the apples, like all things golden, as representing corn, but this is too reductive.)
I had forgotten all about Wirth's mention of the golden apples when I ended "The Emperor's orb" with a mention of the golden apple of Eris. In fact, I had not realized until just now that Eris's "apple of discord" was also supposed to have come from the garden of the Hesperides.
In the myth, Paris had to choose to which of three goddesses to give the apple, and each offered a different reward if she was chosen. Paris, being weak and effeminate, rejected Hera's and Athena's offers of greatness and wisdom and awarded the apple to Aphrodite, who promised him another man's wife. When, centuries later, Prodicus wanted to create a parallel story in which the hero made a better choice, he decided to cast Hercules in the role of a more virtuous Paris. Classicists have expressed puzzlement over this choice, since Hercules was hardly a byword for sound moral judgment, but could he have been chosen because of his association with the golden apples? We know Prodicus's parable of the Choice of Hercules only via Xenophon, but even in Xenophon's brief summary the parallels to the story of the Judgment of Paris are obvious. Is it possible that the parallels were closer still in Prodicus's original, even featuring the golden apples?
Although Wirth calls the golden apples "the fruit of initiating knowledge," its function in myth seems to be closer to the biblical tree of life than to the tree of the knowledge of good and evil. The Norse goddess Iðunn (coincidentally similar to Eden) kept similar apples of immortality, which the gods had to eat from tiem to time to keep from growing old. Gilgamesh brought a plant with this same effect up from the bottom of the sea -- and Gilgamesh was the original, Sumerian name of the constellation later called Hercules. In "The Emperor's orb," I connected the golden apple with the golden ball brought up from the bottom of the pond by the frog in the fairy tale -- a clear echo of Gilgamesh once the golden apple is established as the missing link between the golden ball and the plant of immortality. Just as Hercules went to all the trouble of retrieving the golden apples, only to have Athena return them to the garden in the end, so Gilgamesh brought up the plant of immortality, only to have it eaten by a snake.
In "The Emperor's orb," I connected the Iron Rod and the Liahona -- both associated with the Book of Mormon figure Lehi -- with the Emperor's scepter and orb. (The name Lehi is associated with Samson, the "Hebrew Hercules.") The Iron Rod comes from Lehi's dream of the Tree of Life, bearing fruit which, though white rather than golden, is clearly analogous to the golden apples of immortality.
⁂
Really weird synchronicity: After writing everything above this paragraph, but before finishing the post (I had planned to write some other things, but they ended up not making the final draft), I had to take a break to teach a children's English class. When I went up to the classroom, I found that one of the students had drawn this on the board: 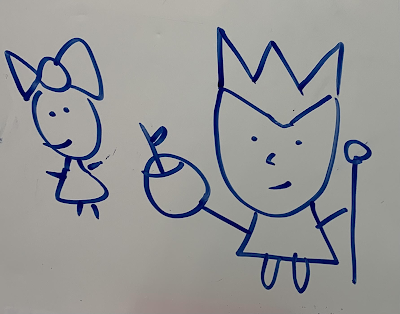 A person wearing a crown and holding a scepter in one hand an an apple in the other! I had been working on this post on the computer in my office, where I'm sure this student could not have seen it. (Even if she had, she's a very young girl who can hardly read any English, and none of the illustrations shows anything recognizable as an apple, scepter, or crown.) So this is either a bit of subconscious telepathy or else just a really bizarre coincidence. It wouldn't be the first time!
at January 13, 2022

The earliest extant Tarot cards are those commissioned by Filippo Maria Visconti and Francesco Sforza, Dukes of Milan, in the mid-15th centu... 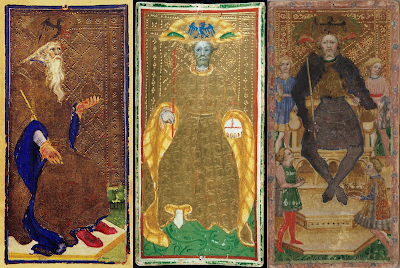 I am an American living in Taiwan, where I own an English school. My main blog is From the Narrow Desert. I work primarily with the Tarot de Marseille and the Rider-Waite deck. My interest is mainly in the history and the (not always historically based) symbolism of the cards, though I do occasionally touch on divination as well. I take synchronicity very seriously, to a degree that probably seems ridiculous at times.
I can be reached at my gmail address, which is wiltyc.