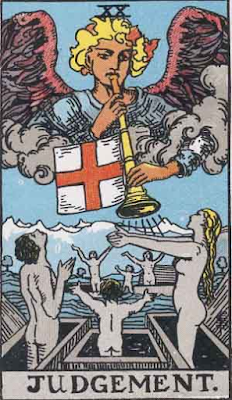 Let's review how this trump unambiguously singles out Donald Trump.
John Opsopaus's version of this trump for his Pythagorean Tarot provides another connection to Trump: the number 45. 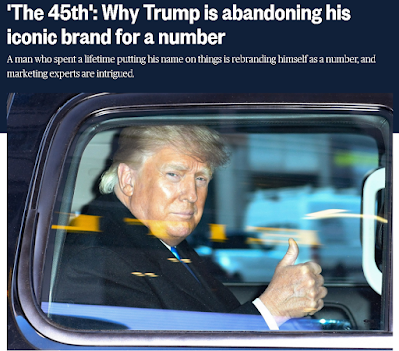 In Opsopaus's version of the card -- which Paganizes its Christian subject, in keeping with the "Pythagorean" theme -- the banner of St. George is modified slightly so that it bears a three-by-three square.

The banner also represents the Square of Saturn for, as Kali regularly destroys the world grown corrupt, so also at the end of the Aeon, Saturn will again eat all his children to clear the boards, so to speak, for the new creation.  Thus the three-by-three format of the banner represents a magic square of order three, which is known . . . in the West as the Square of Saturn.

This is the Square of Saturn -- the three-by-three magic square. 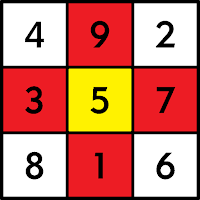 Opsopaus writes that the Square "has enormous esoteric significance" and is "organized around the key numbers 4 and especially 5." There are 9 squares, which is 4 + 5. The sum of all the numbers in the squares is 45. The numbers in the four red squares add up to 20, which is 4 × 5; so do the numbers in the four white squares. That's three different ways in which this figure suggests the number 45. (The two 20s also suggest the year 2020, with which we have already associated this trump.)
So, in addition to all the Trump-specific features of this card, it also seems to indicate the reelection of the 45th president rather than the election of a new, 46th one.
Opsopaus gives each of his trumps a Latin motto. The one for this card is "Resurgens in arca incubatus," translated by him as, "Arising again, having been incubated in the arc" (sic; it should be ark). Resurgens perhaps suggests reelection generally, but the motto refers not to an uninterrupted continuation of power, but to a restoration after an apparent defeat and a period of dormancy and inactivity. If the usurper is removed in the end, and Trump restored, this would be most appropriate. Both Waite and Opsopaus place the incubatory "ark" in the water; Trump's own period of "incubation" is taking place primarily at a location with the very aquatic name Mar-a-Lago. Opsopaus's misspelled reference to "the arc" may also be significant, as it ties in with the recent sync themes of Joan of Arc and Noah's ark.
There are a number of ways I could deal with the apparent failure of my prediction of a Trump win in 2020. I could admit that it simply failed, either because it was all a meaningless coincidence in the first place or because, thanks to the reality of free will, "whether there be prophecies, they shall fail" (1 Cor. 13:8) -- that the Tarot, like the Redskins Rule, gave accurate predictions until one day it didn't. Or I could say that the Tarot accurately predicted the true winner of the election, the rightful president, not the usurper. What I honestly believe, though, is that the prediction was and is accurate in the most straightforward sense, and that, as impossible as it seems, Trump really will be restored to power before the Fake President has served out a full term, and probably this year. This trump's inherent imagery of restoration after apparent death, of resurgens in arca incubatus, makes me more confident in that interpretation.
As for the delay -- nearly four months and counting -- I think it has been very clarifying. My old attitude -- that 2020 happened under Trump, so Biden couldn't possibly be much worse -- has been categorically refuted. At the same time, any enthusiasm for Trump has been tempered by the confirmation that he's not really on the right side on certain key issues -- that, for instance, his only objection to the ongoing birdemic peck scam is that he's not being given credit for it. The restoration of Trump is a necessary first step, but it's only that. Samson, not David.
at May 16, 2021

One could also consider the 45th tarot card.

Using your ideas for ranking the Minor Arcana (https://narrowdesert.blogspot.com/2019/10/dice-and-minor-arcana-outlining.html), there are 3 ways to do this.

Or, the 45th of the minor arcana, which would be the 6 of swords.

Six of Swords is interesting because (in the Rider-Waite) it features a man, a woman, and a child on a boat or "ark."

How do you get the Six of Swords as the 45th card, though?

If we rank the suits according to their historical (Chinese) value, then we get this:

If we use the more recent traditional ranking, swords and clubs are reversed.

Aces are low for long suits, so the numbers for the highest suit (swords or clubs) should be:

You're right. It should be the 3. I forgot that Tarot decks have 14 cards per suit instead of 13.

In that case, the 45th card and the card numbered 45 would be the 10 and Jack of clubs respectively.

But if we put all 78 cards together and rank them, the trumps outrank the suit cards and should be numbered higher.

I think a key aspect of the cards' imagery is their depiction of the lost people put out to sea. Trump, continuing to bray upon his horn about a 2024 run and the stolen election, is inaccessible. They look to him for succor, but he is totally separate from them up in the clouds (or in the other case, hovering above the sheer cliff with his winged boots). They continue to clamor for his assistance, but to no avail. They face judgement.

Could the "moon" be Betelgeuse?

In my last post , I mentioned that Sirius and Procyon -- possibly represented by the two dogs or jackals on the Moon card -- form a triangle... 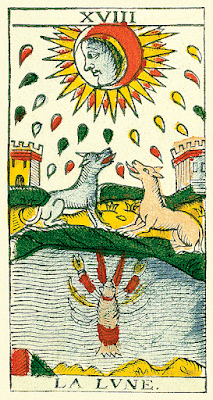 I am an American living in Taiwan, where I own an English school. My main blog is From the Narrow Desert. I work primarily with the Tarot de Marseille and the Rider-Waite deck. My interest is mainly in the history and the (not always historically based) symbolism of the cards, though I do occasionally touch on divination as well. I take synchronicity very seriously, to a degree that probably seems ridiculous at times.
I can be reached at my protonmail address, which is wiltyc.